More than 1500 skiers today enjoyed the sunny winter-weather in Jakuszycka/Poland at the 40th edition of Bieg Piastow. We had dominating French skiers at the last FIS Worldloppet Cup stages, but not today in the classic technique race! Today the well known Swiss guy took the victory in the men’s competition, while a Czech was able to beat Dabudyk.

At his first try at Bieg Piastow Toni Livers already took the first place. “He was just too strong today, specially on the uphills. I am very glad to be second. No chance for me to follow him!”, said second Rocarek Jiri (CZE). This two skiers created a gap to the chasers already after 25 km and from that point on they were on their own and worked together. Until the hill called translated “No mercy” at km 43. There Toni started his attack and got rid of Rocarek. Powerfully Livers brought the race to an end, so did Rocarek achieving the second place. Again, like last year’s Bieg Piastow, on the third podium place we have Benoit Chauvet (FRA). Long time he and his team-mate Candide Pralong (SUI) cooperated and chased the leaders but Pralong was not able to follow a very strong Chauvet after 40 km. It was not the day of Ivan Perrillat Boiteaux, the FIS Worldloppet Cup leader, he finished 11th with almost 2:30 behind. 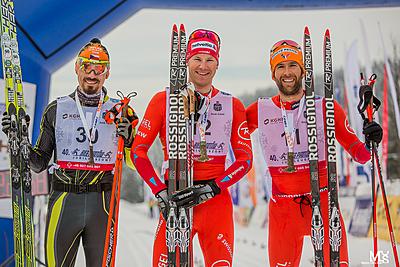 In the ladies the FIS Worldloppet Cup leader and winner of La Foulee Blanche and Dolomitenlauf this year, Aurelie Dabudyk (FRA) was not able to win again. Too strong was the Czech Adela Boudikova. After 30 km Dabudyk couldn’t follow her highspeed anymore and had to fall behind. Boudikova was on her own the last 20 km but this seemed not to any problem for her. In the finish she had a lead of more than 5 minutes to Aurelie Dabudyk. On third place, half a minute later, Klara Maracova (CZE) crossed the finish line. 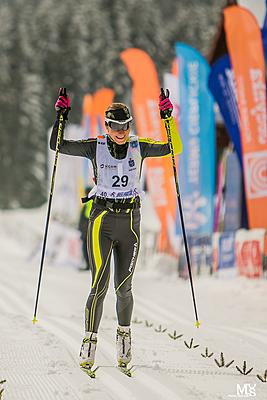 Aurelie Dabudyk and Ivan Perrillat Boiteux are remaining the leaders in the FIS Worldloppet Cup overall ranking. Perrillat Boiteaux has a lead of 40 points before Bastien Poirrier. On 3rd place we now see even Benoit Chauvet and Toni Livers. Aurelie Dabudyk extends her lead with another 80 points and now has  comfortable 161 points between her and second Klara Moravcova.

Now only two more stages are left in the FIS Worldloppet Cup, namely the Engadin Skimarathon coming weekend and the Ugra Skimaraton beginning of April. Both leaders in the cup overall ranking remain the same like before the race: Ivan Perrillat Boiteaux and Aurelie Dabudyk. But it’s getting closer and closer.

Find more pictures in our gallery.