The third year in a row the entries of the Engadin Skimarathon have exceeded the 13.000-mark. At 8:30 the field started today in Maloja on the lake Silvaplana, only the sun was late. Clouds and a bit of wind lead to a hard race for the elite skiers and the popular skiers in the beginning.
“First, second and third place for Switzerland!” Roman Furger managed to be the fastest one out of the 20 skiers coming to the finish lane together. Right behind him, not even a second, Toni Livers, who won the last stage of the FIS Worldloppet Cup. Joeri Kindschi, from Davos, took the third place only one hundredth of a second before Bastien Poirrier (FRA). Benoit Chauvet (FRA) crossed the finish line as 5th. With a winning time of 1:48:08 and only 23,41 km/h average speed it was quite a slow race. From beginning on nobody wanted to attack or speed up, only Ivan Perrillat Boiteaux (FRA) and Schaad Fabian (SUI) once in St. Moritz, but just for the “Helvetia-Sprint”. Until the last kilometers a group of around 50 skiers with all the favourites in it worked together. But then Adrien Mougel (FRA) started to increase the pace and one by one fell behind. The last kilometer was the time of the Swiss skiers, and Furger, Livers, Kindschi, Cologna and Candide built a wall in the leading positions. Dario Cologna unfortunately broke his pole and fell back again to position 25, the others kept beeing on top. 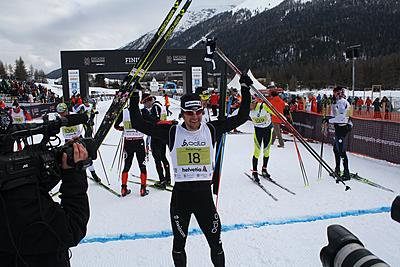 (find more pictures in our gallery)
She made it!
Faivre Picon Anouk (FRA) got her third victory at Engadin Skimarathon. With 14 seconds ahead of second lady, Sereina Boner (SUI), she achived what nobody has done before, to “tripeat” her vicotry. Klara Moravcova from Czech Republic came to the finish as third. It was not the day of  the number one in the FIS Worldloppet Cup overall ranking, Aurelie Dabudyk (FRA). She broke her pole at the start and had to fight herself back to the front positions, but was not strong enough to hold the speed of Picon, Boner and Moravcova. In the end she lost her final sprint for the 4th position closely against the Italian, Elisa Brocard.
But Dabudyk is remaining on top of the FIS Worldloppet Cup overall ranking and inofficially she has already won the FIS Worldloppet Cup 2016, because she has 121 points more than second, Elisa Brocard. Third place before the final stage in Russia goes to Czech Republic, to Klara Moravcova.
In the men’s overall ranking almost everything changed after the 7th FIS Worldloppet Cup stage: Toni Livers, with his second place, hence 80 points today, takes the lead from Ivan Perrillat Boiteaux, who now is on the third position. Second and only 20 points behind Livers is the Frenchman Bastien Poirrier. So the final stage in Russia in the beginning of April, the Ugraloppet, is going to be very exciting!
< Back